Everybody knows Sweden. Part of Scandinavia. The land of the Vikings. All over the world people shop at IKEA and eat their meatballs and gravad lax. So it’s surprising to me that not more people visit this beautiful and diverse country. Sure, it’s not the cheapest destination, but that can’t be the reason, can it? Iceland is in the same price range as Sweden and is overrun by tourists year by year. Sweden deserves more visitors, so I hope this blog will lure you into visiting the Dalarna region. 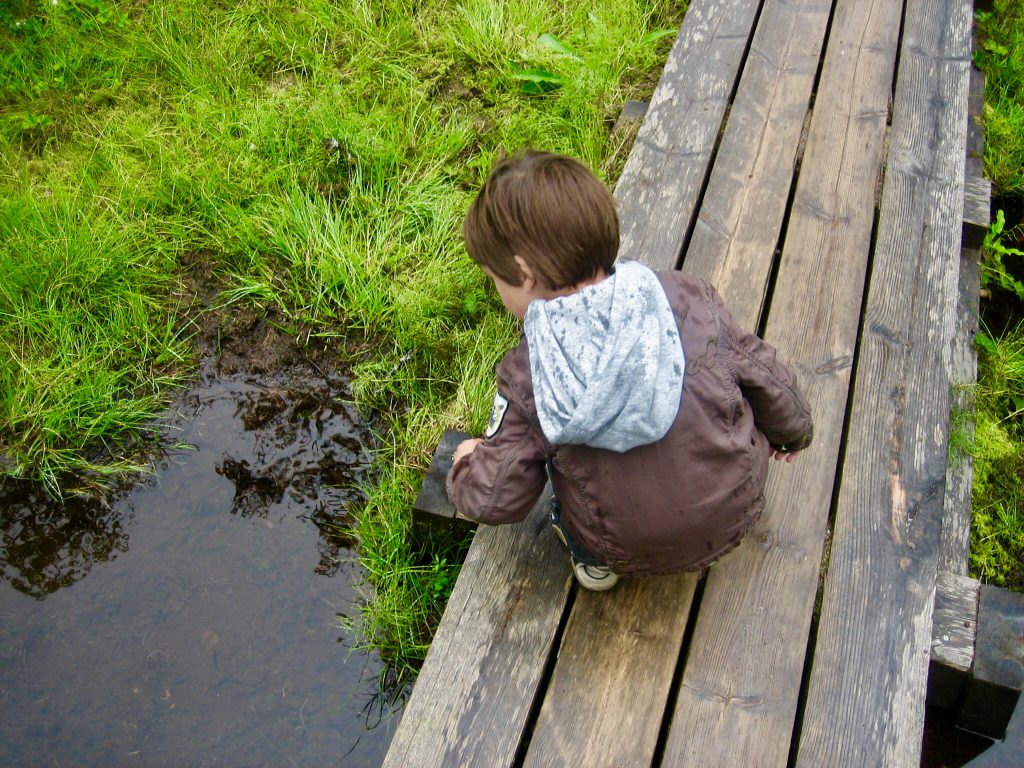 Dalarna is a province of Sweden, or Landskap as the Swedes say. This part of Sweden is a must if you’re into nature. You can take the most beautiful hikes there, visit Fulufjallet National Park, see moose and even bears if you’re really lucky. And there’s lots for you to do around the huge lake Siljan. When you’re sick of nature visit small cities like Mora or Sälen. I really hope that after you read this blog and see the pics, Dalarna will end up on your bucketlist. 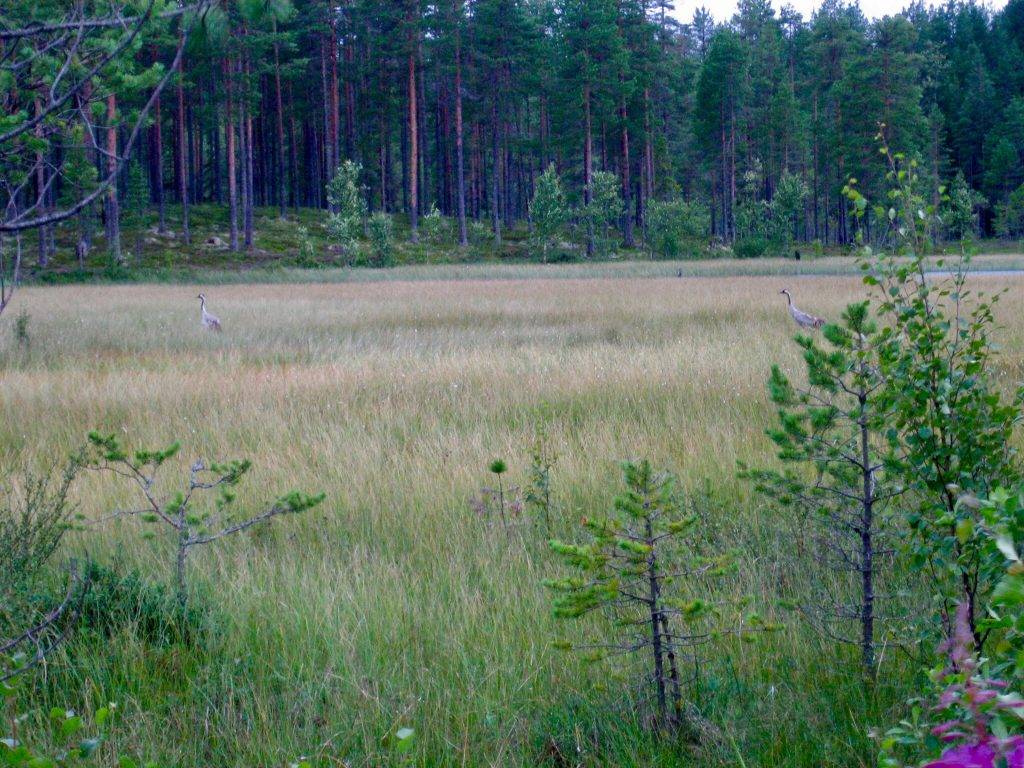 The most ideal way to do this trip is by car. That way you are the most flexible. You have to drive lots of kilometres and doing that by bus isn’t convenient, because before you even get to a bus stop you’ve already walked loads of kilometres. Also, the landscape is so beautiful that you probably want to stop along the way to admire the view and pause for a bit. So rent a car if you’re flying to Sweden or take the trip in your own car (that’s what we did).

For us the adventure begins after we lock the front door. Not when we arrive at our destination. The flight is part of the travel fun, but in this case so was the road trip we took to get there. First we drove from Leiden, The Netherlands, to Kiel in Germany and took the Stena Line ferry to Göteborg (on the way back we did Oslo-Frederikshavn). When you are traveling with kids, this is a real treat for them. Our eldest was 3,5 years old at the time and the whole drive up to Kiel he was excited and couldn’t wait to get on the boat. The fact that our car could drive into the boat was another highlight and when he got to our cabin he was even more excited. As a surprise we didn’t tell him we would have to spend the night on the boat. We had our dinner overlooking the Kattegat (name of the sea area) and saw the sun go down on deck. After arriving at the harbor of Göteborg in the morning we still had a six hour drive to go. We were well rested, so that wasn’t a problem.

For the most part it was a scenic drive. And we killed time searching for the traditional wooden houses that Sweden is known for. We didn’t spot the first one until we arrived in the very small village of Näsfjallsbyn, though. But after spotting the first one we saw them everywhere. They are even cuter in real life.

In winter time the small village of Näsfjallsbyn is filled with tourists that are here to ski. Mainly in nearby Sälen, but in summer time you will only run into a few locals and there is not a tourist in site. We really enjoyed this place as our base for all our Dalarna adventures. So secluded and quiet. That’s probably why we were lucky enough to spot a family of moose in our garden (gardens here are mostly not fenced off). You won’t regret spending your time here. I can assure you that.

So what did we do in Dalarna?

Fulufjället NP is 385 square kilometres big and is divided in 4 zones. It hasn’t been a NP for long, only since 2002. You can start off by going to visitors centre Naturum to book a guide that will walk along with you. We decided to explore this park without a guide and which is perfectly doable and we enjoyed going alone.

The first day we visited the park we drove to main entrance Njupeskärsentrén and parked our car. After you pass the visitors centre it is a two kilometres short but beautiful walk to Njupeskar. Njupeskar is Swedens largest waterfall and really worth a visit. This walk is easy enough for young kiddos who want to walk themselves. You can also walk this path with a stroller, but then you will have to take the same road back to where you came from after enjoying Njupeskar, because the rest of the route isn’t suited for strollers.

We saw many birds, including the Siberian Jay, but I was secretly (and naïvely) really hoping to see a lynx. But of course they aren’t easy to spot, so even though this part of the park gives you the best chance of spotting one it very seldom happens. I think that the fact that we had an active toddler in our midst didn’t help either. All in all, this loop route is about 4 to 5 kilometres long and completely worth your while. 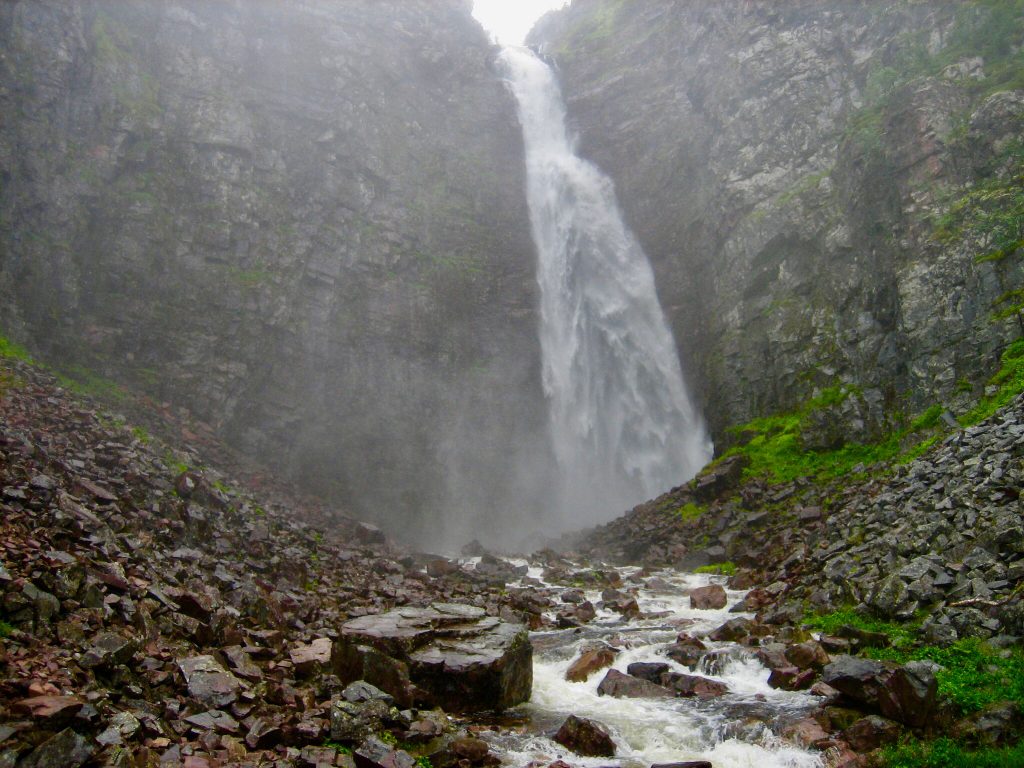 In 1997 there was a flash flood at Mount Fulufjället that caused great devastation in the region. The Göljän river reached a volume around 500 times bigger than normal. Because of this a small tsunami occurred of about 6 metres high that uprooted about 10.000 cubic metres of timber. As a result all vegetation along the waterways was removed, and is now slowly growing back. We really wanted to see for ourselves what the area looks like now and we were in awe of nature. We had never seen so much wood laying around (great for climbing, by the way) and saw lots of different fungi. Such a weird and beautiful experience. You have to see it to believe it.

You can walk two loop routes. One that’s only a kilometer long and one that’s 4 kilometres long. We did the latter and I advise you to do the same. This walk is a little less easy than the Njupeskar walk, but it was still easy enough for our toddler, so maybe that puts things in perspective for you while choosing one of the two options at the start of your walk. 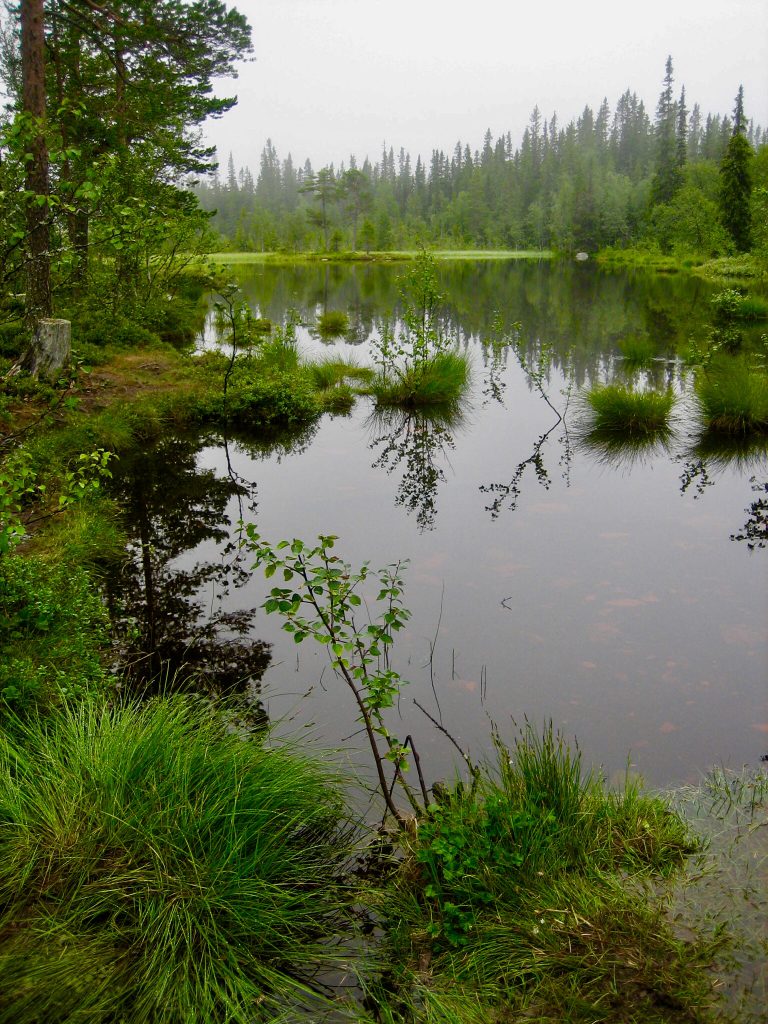 There are so many other walks to do in this NP and you can also opt to stay at one of the huts in the park and take long walks. We hope to come back here one day and explore more of this beautiful park. 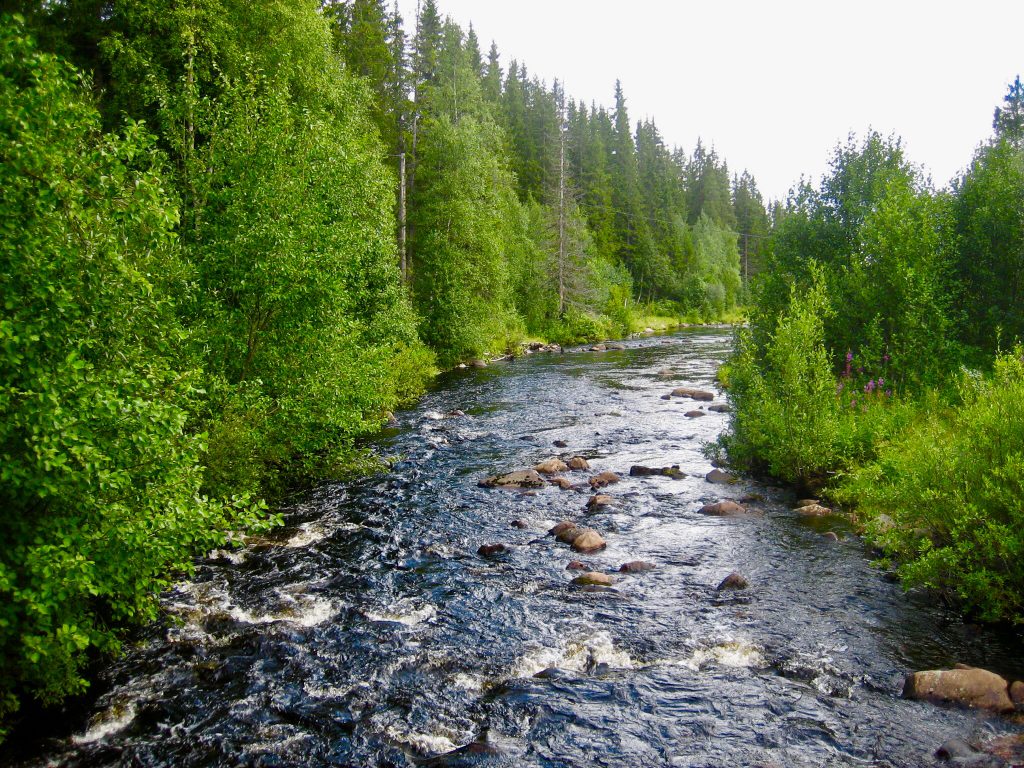 In winter Sälen is packed with people from in and around Sweden that come here to ski and/or snowboard. In summer time there isn’t much to do aside from doing groceries and some shopping in the small mall. We went out to dinner there a couple of times at a pizzeria in the city centre called Pizzeria Dalarna. When we went there in 2008 they were tasty, but a quick look at Tripadvisor tells me that they get a 3 out of 5 nowadays. Sälen is the place you go to fill up on gas, groceries and to go out to dinner. There are a few good restaurants out there, but check out if they are open before you head out there. Some of them are only open during winter season. 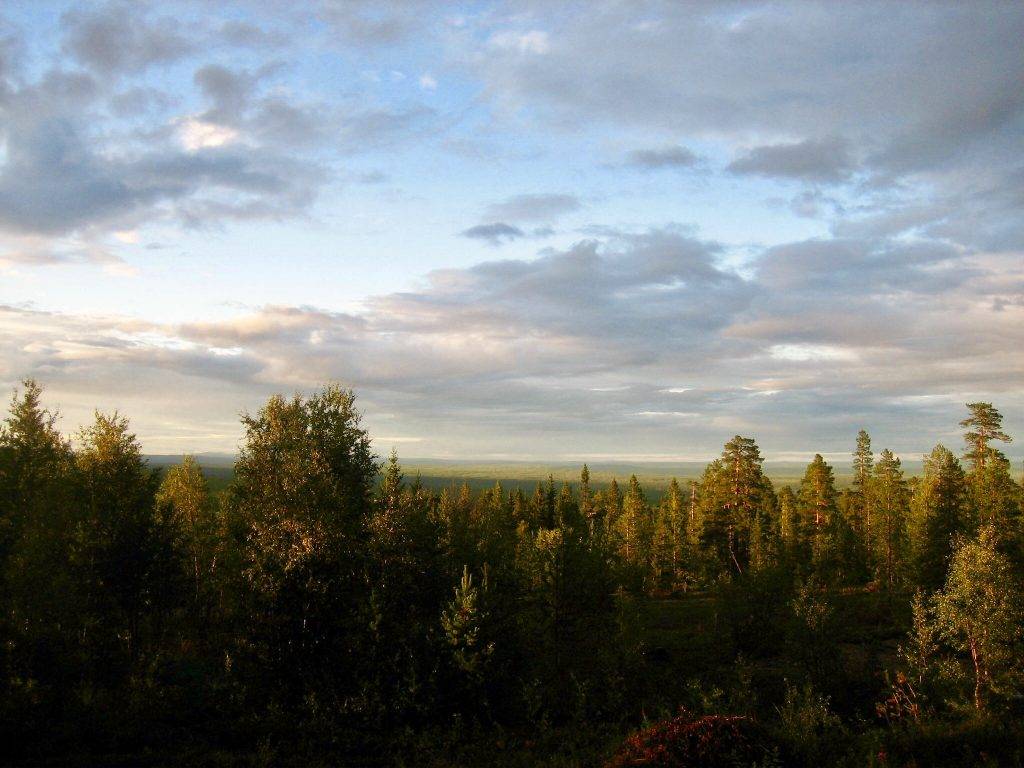 Ever heard of the Dala horse? These painted wooden horses became one of the best known symbols of Sweden after a giant version was placed outside the Swedish pavilion at the Worlds fair in New York in 1939. They originate from Dalarna, hence the name. And they are made in villages surrounding the city of Mora. Mora is beautifully located by lake Siljan and is a small and picturesque town. You can visit Santa World that is sold of as being the residence of Santa Claus, where you will see elfs and trolls.

The centre is known for the many handicraft stores, a great place to pick up a souvenir from your trip to Dalarna. Dala horses are of course the most wanted souvenirs and you can find them in many sizes.

We spend our afternoon at the park in Mora at Lake Siljan. Lots of playgrounds for the kids and overall a great place to chill. 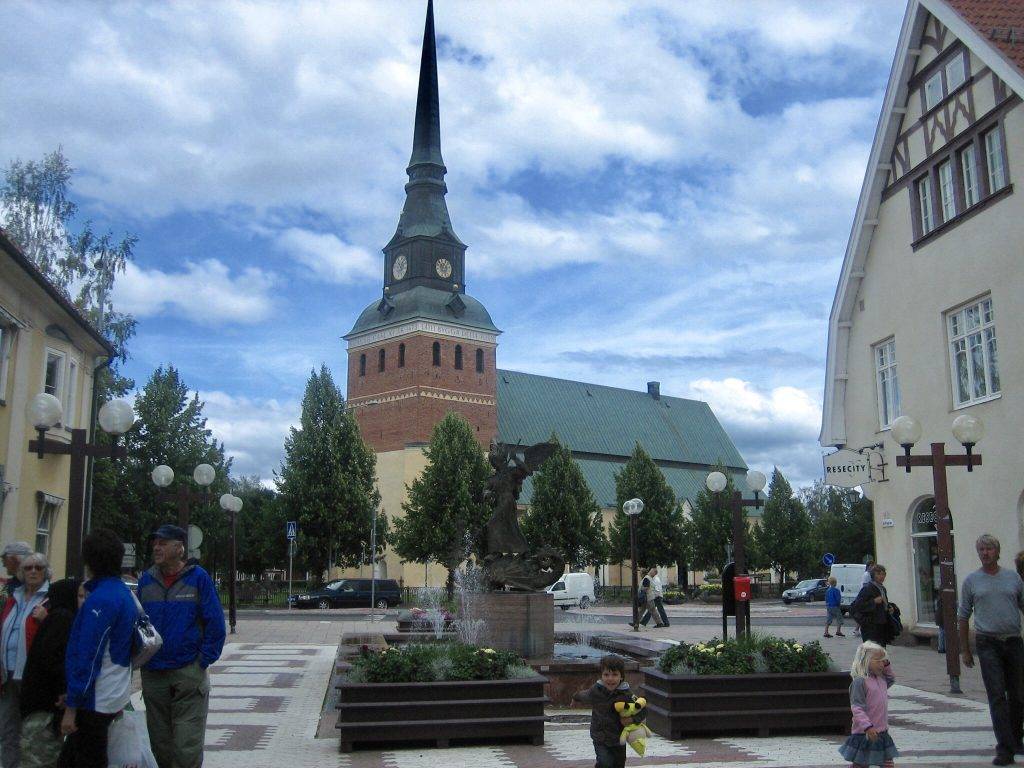 This place in Mörkret doesn’t exist anymore, but there are many other Moose parks that you can check out in Dalarna and most of them are very much the same. The parks are situated in a forest where you can watch the moose from behind low wooden fences. That way you can’t bother or pet them and just admire them from afar. We saw a few moose in real life while driving through Sweden and at our own cabin, but here you can watch them more closely. We had a blast at this park and obviously our toddler loved it too. 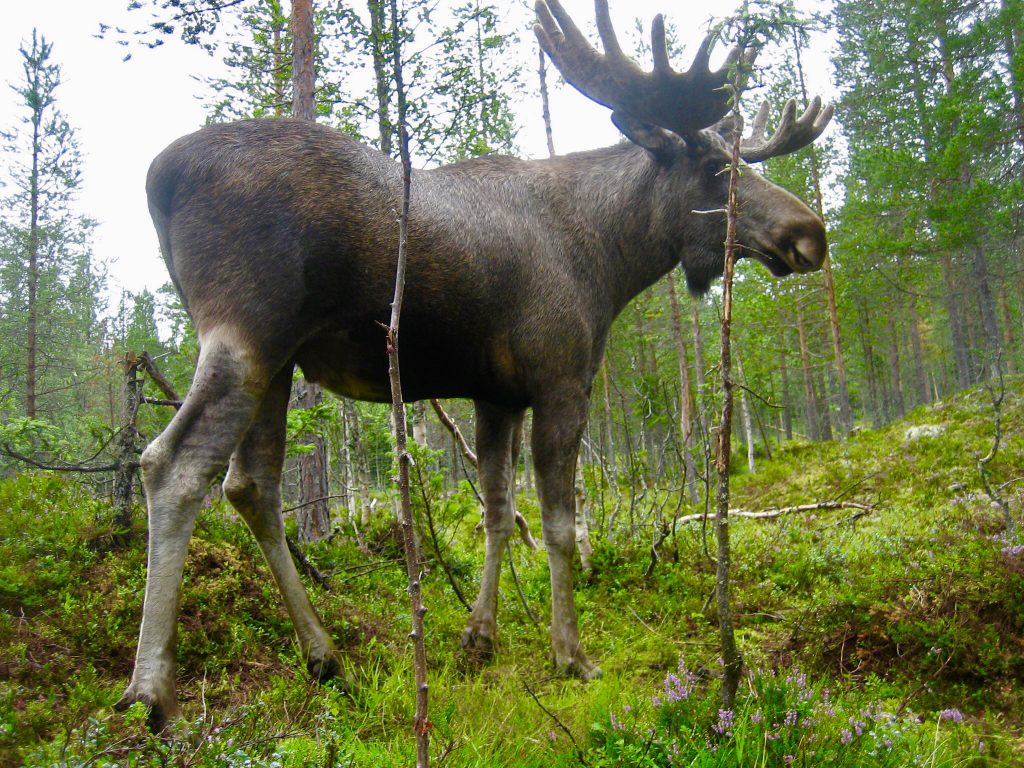 We were only in Dalarna for a week and a half. So this list is far from complete and doesn’t do justice to this gorgeous province. That’s why we would love to go back there someday. I hope I wrote enough about Dalarna for you to be curious and invest some time in reading up about this Swedish province. It really deserves more visitors.

Have you ever been to Sweden? And have you visited Dalarna? Let me know in the comment section below.