The first thing that comes to mind when someone mentions Jordan is Petra. Which isn’t surprising with its breathtaking rose-red hues and highlights being the Monastery and of course the Treasury. You haven’t really visited Jordan if you didn’t visit Petra. But Jordan is much more than just Petra. There’s so much more to see in this beautiful yet small country.

It’s also one of the most stable Middle-Eastern countries at the moment. This is the moment to visit it, because tourism is slow due to tensions in adjacent countries. You will be relatively alone at most sights and you will be safe while checking them out.

One of my friends is actually in Jordan right now, so that made me think about my own trip and all the beautiful things I’ve seen. Coincidentally it’s exactly 10 years since my visit. So that seemed like a great moment to write about all the highlights I’ve seen during my first solo-trip ever.

So here it is, my top 10 must-sees in Jordan (in no particular order).

In about 750 AD the rulers in the majority of the Middle East were the Umayyads of the Umayyad Caliphate. They built lots of desert castles and 1200 years later some of them can still be found in Syria, but the majority of them can be found in Jordan. Calling them castles isn’t very accurate though, as most of them were agricultural bases or caravansarais. There are two very much worth your time while in Jordan. Just a short drive from Amman following the Desert Highway.

You can find Qasr Al-Kharanah about 60 km from capital Amman. This desert castle was never a castle to begin with. It appears to have been used as a caravansarai. It was build in 710 AD (as that’s the year that you can read in the graffito in one of the upper rooms). The building is a square with a large open area in the middle and small corner towers. It’s a two level building made of limestone. The building suffered damage from earthquakes but was restored in the late 70s. 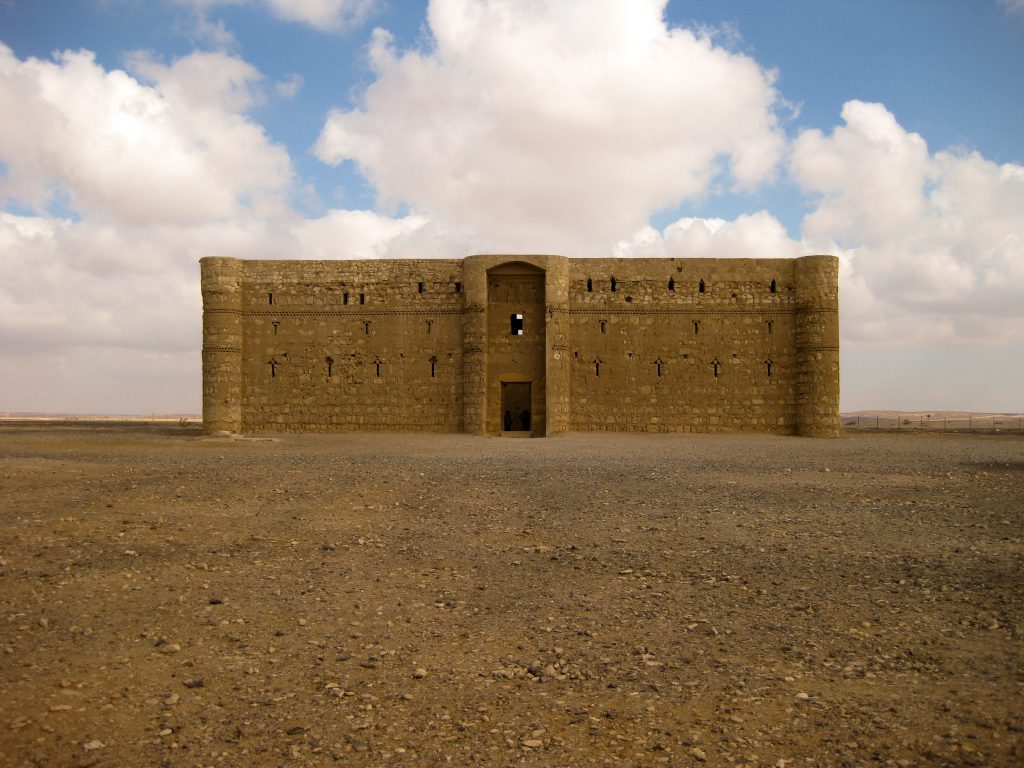 If you enjoyed Qasr Al-Kharanah, you will definitely enjoy this qasr. It was built around the same time as Al-Kharanah but used for a different purpose. It was a hammam. This building is very well-preserved and you will find lovely murals inside the reception hall and the bath complex. It is no surprise that this complex is a UNESCO World Heritage Site. 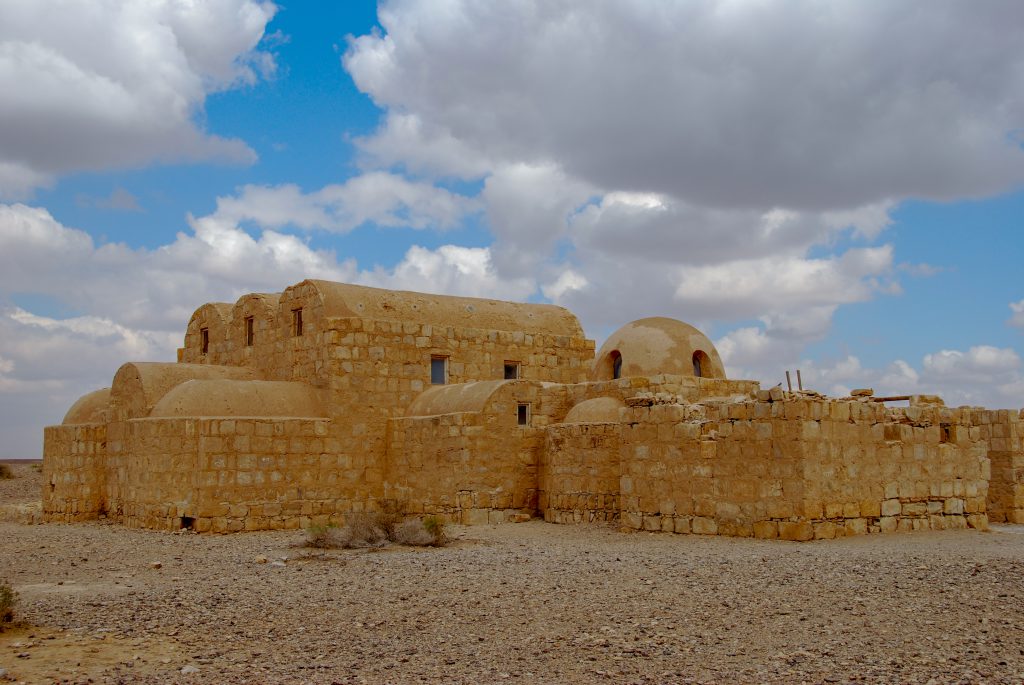 Amman is the capital of Jordan and if you came here by plane, you’ve most likely arrived at the airport of Amman. The only other option being Aqaba. In Amman you will experience traditional and cultural aspects of the Middle East but with a modern twist. You should definitely visit the Amman Citadel and the souqs in downtown Amman and the Al Hussein Public Park. I really enjoyed Amman, maybe also because it was my first time ever in a Middle Eastern city. 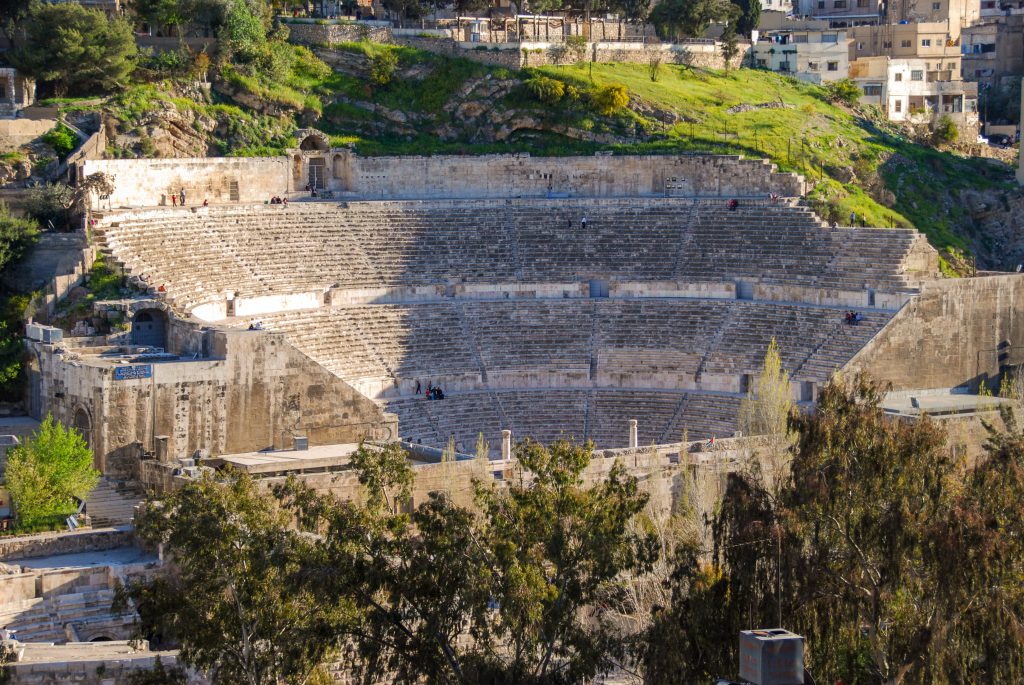 Yep, you can dip into the Dead Sea while in Jordan. It’s not only accessible from Israel. It’s such a weird feeling to float in this salt water lake. Don’t go in here if you have wounds somewhere on your body, because it will sting! Otherwise just let go of control and lie down. The floating is really fun. It was a really clear day when I visited it and I could see Jericho and Jerusalem on the other side of the lake.

I also saw loads of people using the mud from the lake and grease themselves with it. I didn’t try it myself, but loads of peeps are convinced that it helps calm down their psoriasis and reduces their back pain. You can even buy it in the stores around the Dead Sea for a pretty penny. I even saw it on Amazon.com once. 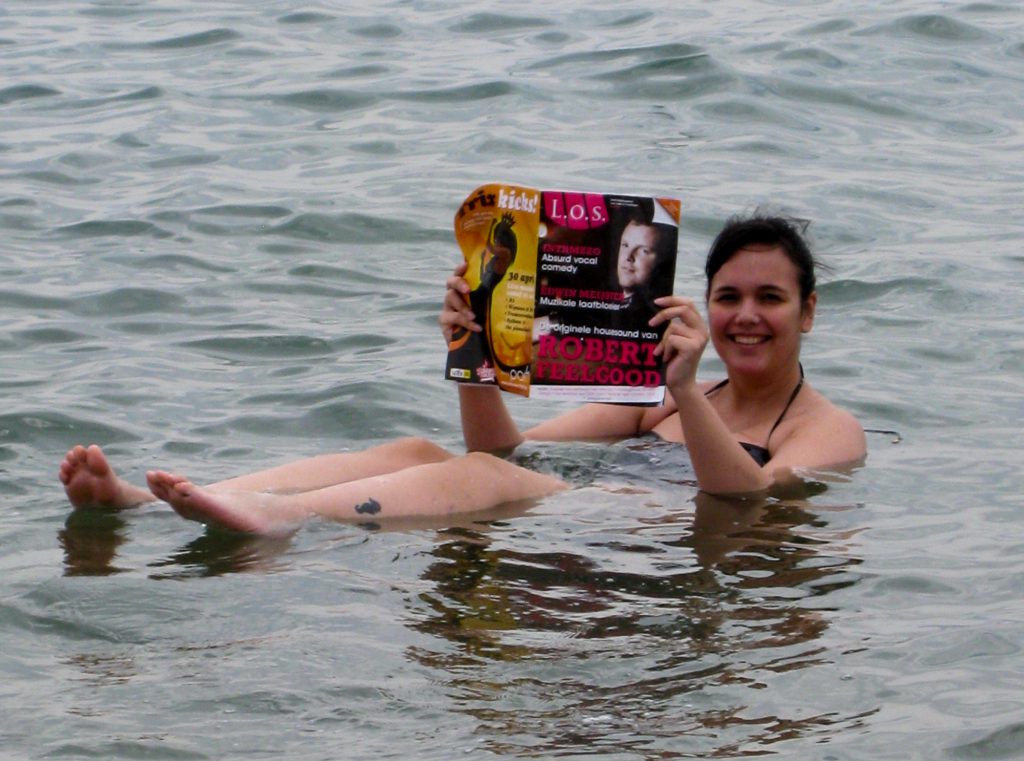 Jerash is a place that makes you wonder why not more people know about it. It’s one of the most well-preserved Roman cities in the world. It really resembles Turkey’s Ephesus only in better state. Mainly because they restored parts in the 70s of last century. We spend a whole morning there and I loved it. On a hot day wear a hat and sunglasses, because there are little places with shade on site. 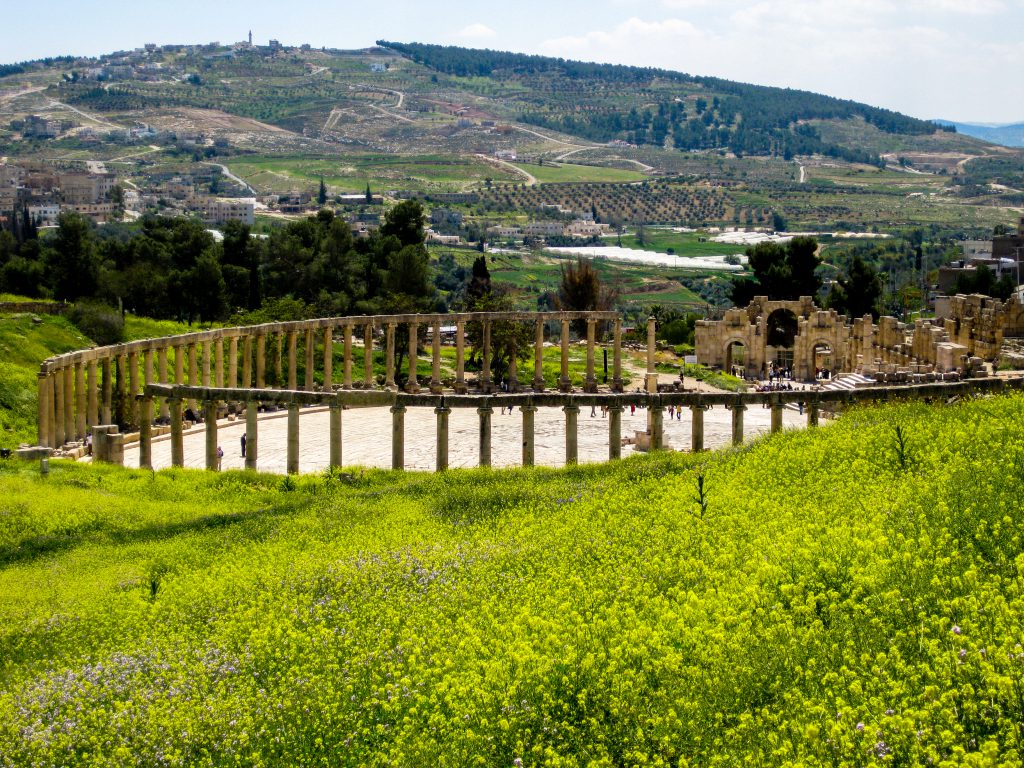 Dubbed as Jordanian’s Grand Canyon, King’s Highway is a road that you wish could go on forever. Now, although it’s high on my bucketlist, I haven’t been to the Grand Canyon yet, but I can understand the resemblance after seeing lots of pics of this American highlight. It really is a sight for sore eyes so make sure you won’t fall asleep during your car ride on this highway. 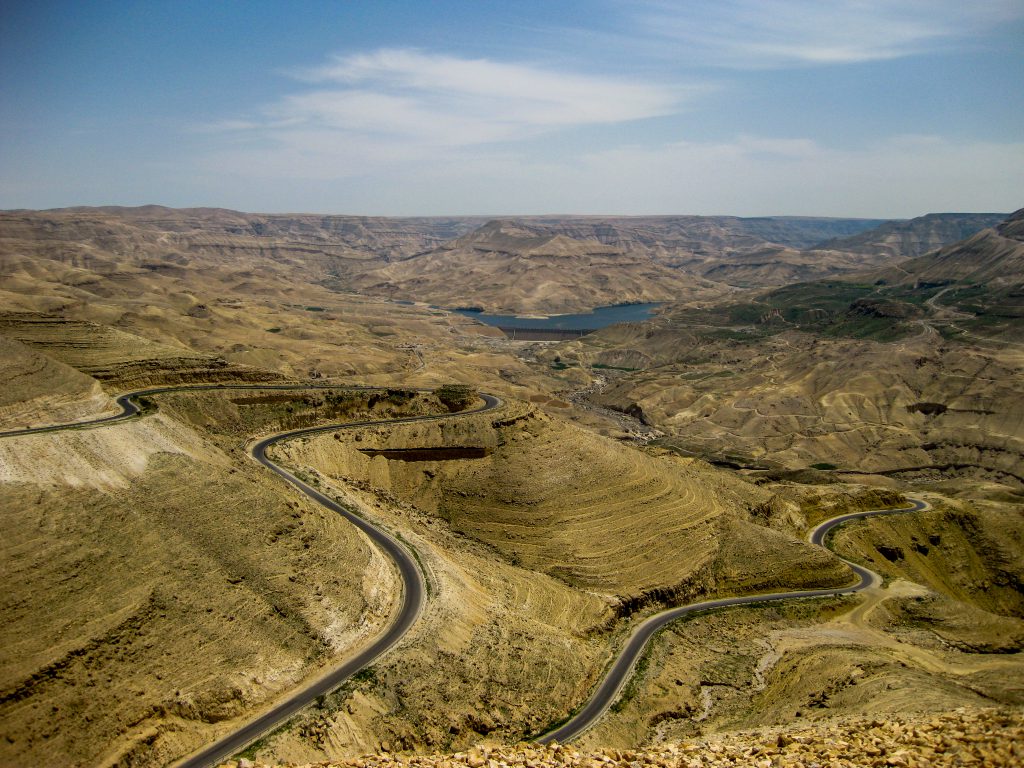 According to the bible this is the place where Moses first laid eyes on the promised land, just before he died. If you are a believer this is a place you want to visit. Pope John Paul II before you has done the same. But for me this place is a must-see because of the view. It’s a panorama of the Holy Land and the valley of the River Jordan. When I was there we had a clear view and saw Jericho and Jerusalem from afar. And while you’re there visit the Moses Memorial Church where you’ll find beautiful mosaic floors. 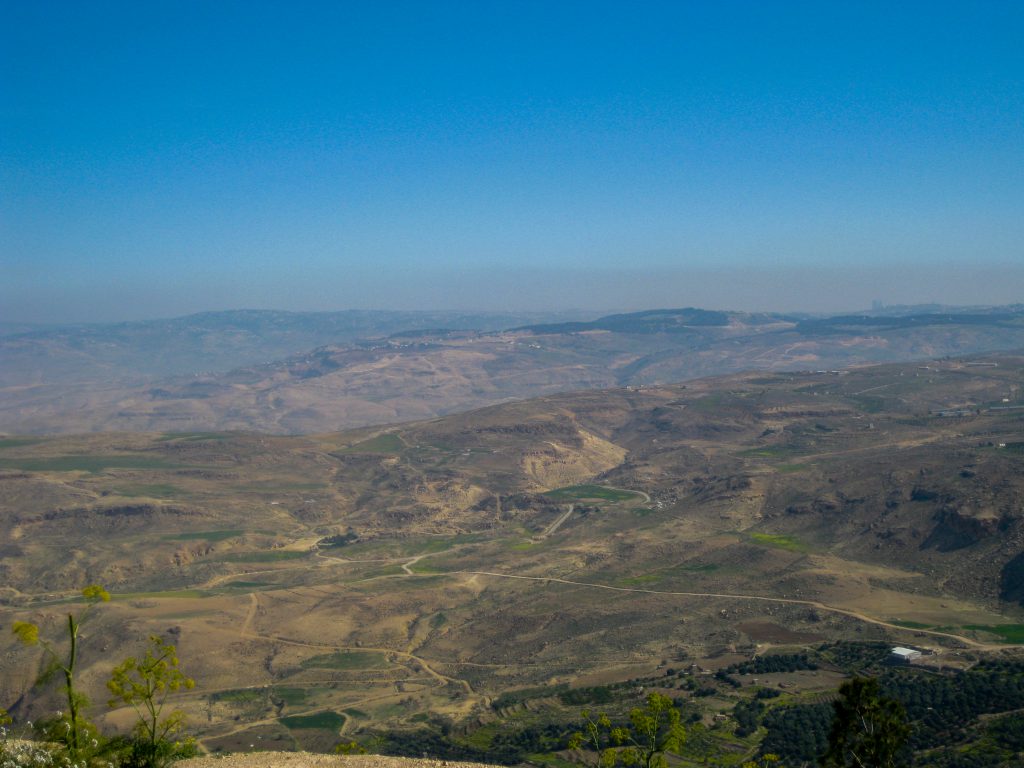 In al-Karak you will find a crusader’s castle called Kerak. The castle isn’t in the best of states, which is why UNESCO decided that it wouldn’t become a World Heritage Site, because other crusader castles are better preserved. Still it is a great place to visit and fantasize about all the things that happened there.

Sadly, this place was attacked by terrorists in December of 2016. A group of terrorists started shooting in different places in the city of al-Karak and in the end they sought shelter in Kerak Castle. It was the first attack in many, many years and it didn’t happen again after this one. So please don’t let this fact keep you from visiting. 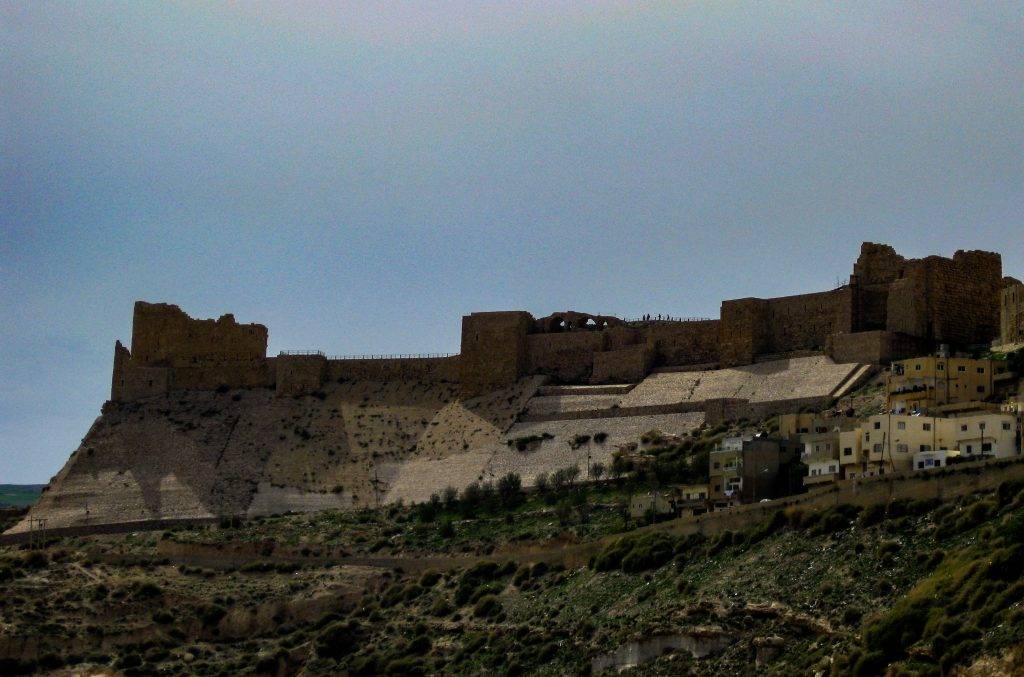 Driving through the desert of Wadi Rum in a 4WD is one of the most liberating things I ever felt. Such a beautiful and peaceful place to be. Not only the drive was amazing, but pausing in the middle of the desert in front of a limestone mountain as our backdrop, while our Bedouin guide made us a cup of tea right then and there was so nice and really a once in a lifetime experience. I also took a camel ride, but I was scared to death because the camel kept trying to bite my ankles, so I was really happy when that ride was over.

After these fantastic day activities we arrived at a Bedouin camp. Ok, ok, not a real one, I’m very much aware of the fact that we were at a tourist trap. But I deliberately booked it, because I really wanted to spend the night in the desert. It started out with a great traditional dinner. The flavours where amazing, even the rice was a real treat, the way it was prepared with all the herbs in it. We also had Zarb, a Bedouin bbq, which means they cook the food underground in an earth oven. After this gorgeous dinner we danced under the stars and smoked from a water pipe. Our 4WD drove us deeper into the desert in the dark and that was magical. I entered my tent and put on some extra layers and fell into a very zen deep sleep. Waking up the next morning at 6am fully rested and relaxed I came out of my tent and it was absolutely one of the most beautiful places I ever woke up in. 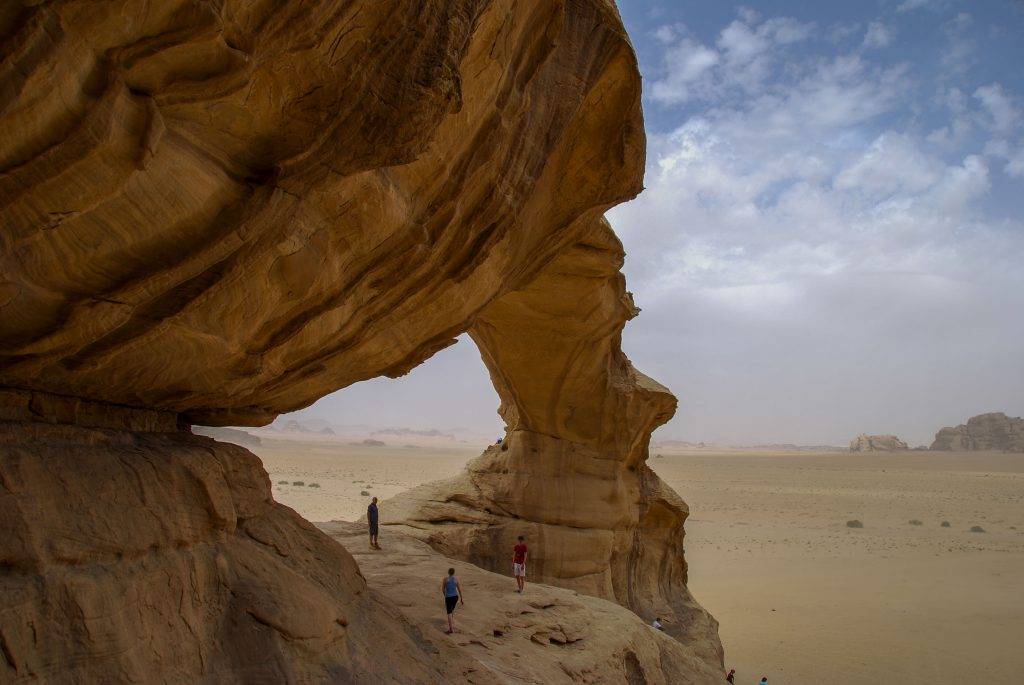 This city is very much focused on the sea activities. From Aqaba you can dive and snorkel and it’s very beautiful underwater. The sea food is also to die for here, so make sure to have a little taste of that. 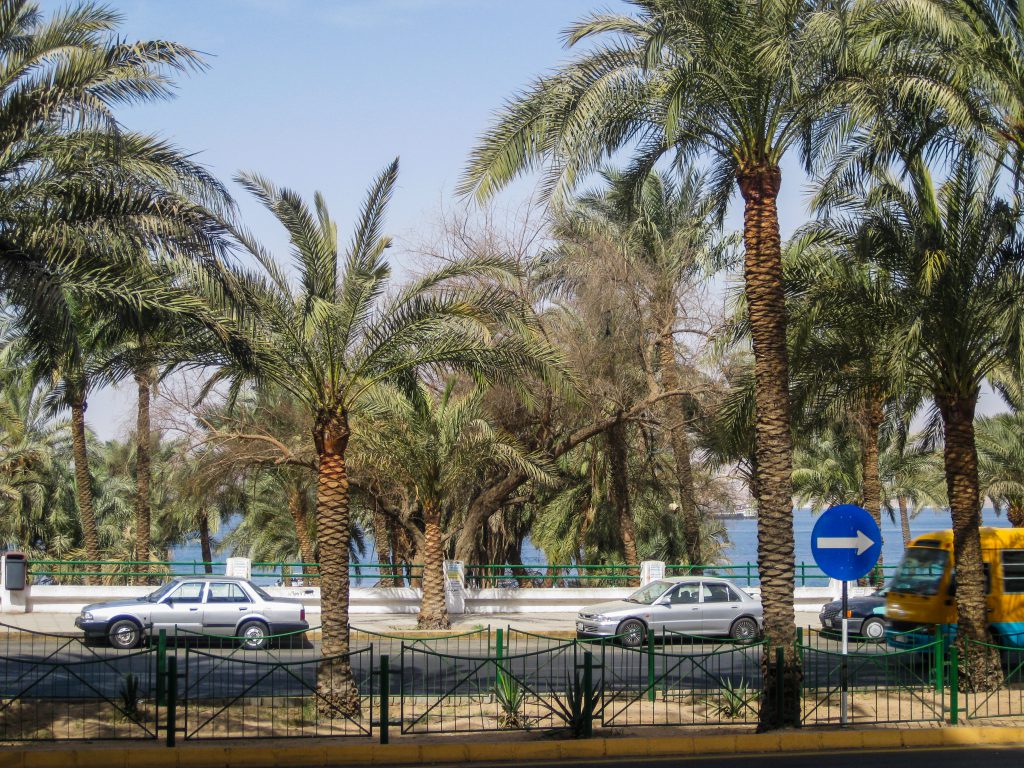 You didn’t think there could be a top 10 must-sees of Jordan without mentioning the most famous one, right? The Nabataeans found themselves a place concealed from the world and turned it into one of the most beautiful cities in the world. The changing of colours of the rock formations into different shades of rose-red (hence the nickname) takes your breath away and that starts when you enter the city through the 1.2 km long Siq with it’s high walls and very narrow pass. With every turn in the pass you wonder if that is going to be the moment that you get your first peak at the Treasury. The moment you sneak that first peak you are in love. It’s so absolutely beautiful! Make sure you go there as early as you can. You really don’t want to be one of the many ants swarming the place. It will take away part of the magic. 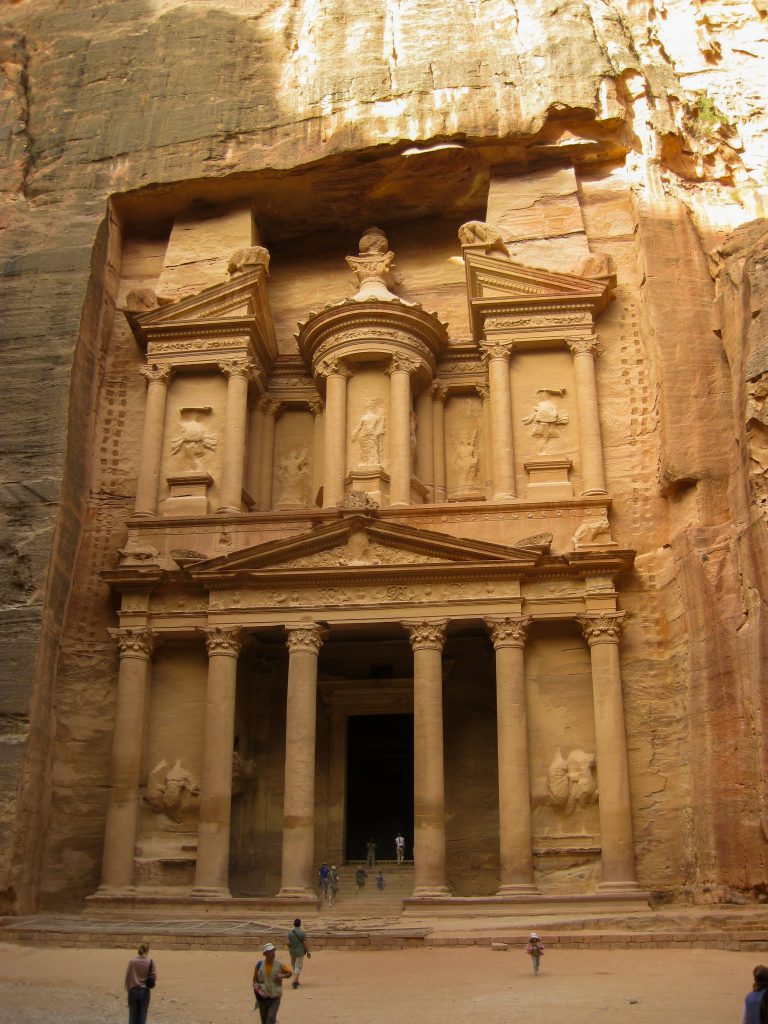 After seeing the Treasury your journey through the rest of this great city is just starting. Make sure you safe up enough energy to take the walk up to the Monastery and in between walk through the street of facades, check out the theatre and again take a hike up to check out the High Place of Sacrifice and be rewarded with a breathtaking view over the city.

Oh and don’t forget to go back in the evening where they put on candles and they serve as a passage way right up to the Treasury and you can admire it in the dark with all those beautiful lights on around you. 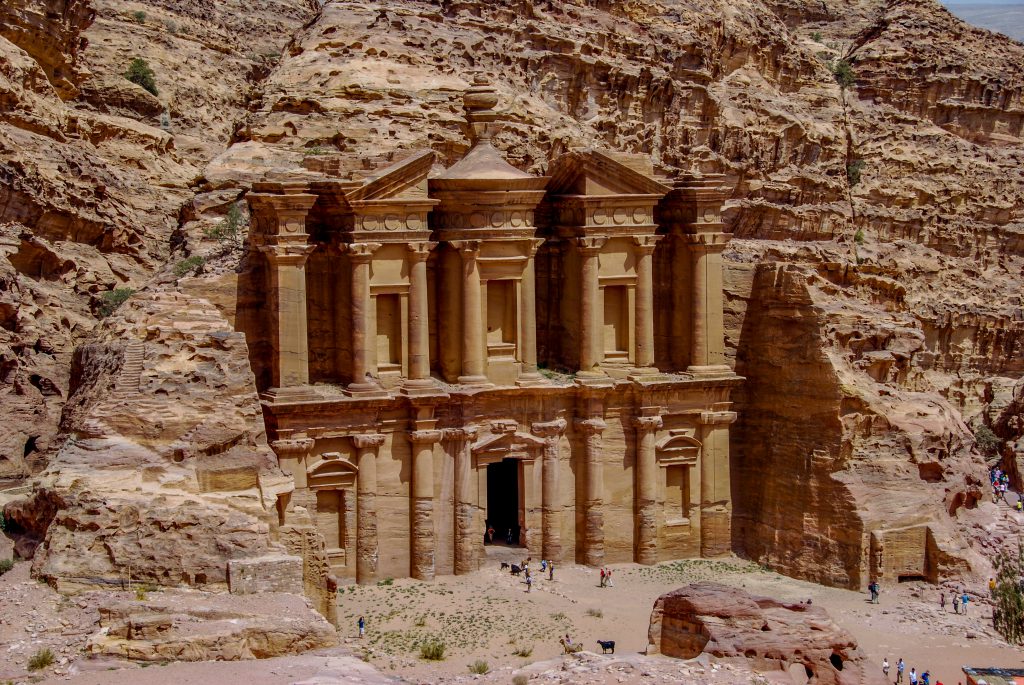 I only spend one day in Petra and that was my loss. The good thing is that I will have to visit Jordan again to see more of Petra. And also check out Wadi Mujib, which is a place I missed out on the first time.

I hope this top 10 inspires you to hop on a plane to this beautiful country and if you do, let me know what you think!

I visited Jordan too and although I've seen so many countries Jordan really surprised me in all senses! I loved it! It was so amazing!

I feel the same way about Jordan! It’s a country I would like to see more of ánd more of the same of.

Thank you! Iceland is going to give you the same vibes. When summer is coming.